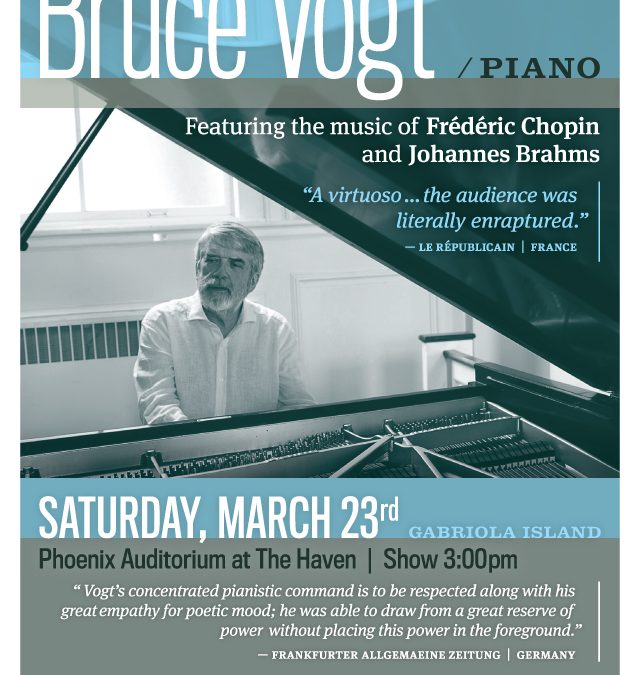 Bruce Vogt is a Canadian pianist and teacher who has received praise internationally for his mesmerizing performances, inspiring audiences across Canada and abroad.  He has given recitals across Europe, as a soloist and with chamber ensembles, in such major centres as London, Paris and Prague, as well as in venues in Germany, Italy, Slovenia, Bulgaria and Romania, among others. His upcoming visit to Japan in September of 2019 will be his fifteenth Japanese tour. He has also performed and taught in China.

His repertoire is diverse, encompassing music from the sixteenth century to the present. He has long championed the music of contemporary composers, and has commissioned and premiered a number of new works by such Canadian luminaries as Murray Adaskin and Alfred Fisher. He is also a dedicated performer on period instruments. One of his recordings features music of Robert Schumann performed on a restored 1864 Erard piano.

In addition to his career as a soloist and chamber musician, Bruce Vogt is Professor at the University of Victoria. Because he sees teaching and working with young pianists and teachers as an important commitment, he leads master classes and workshops and adjudicates for festivals.

In recent years, he has received many invitations in Canada and abroad to indulge another of his passions – improvising accompaniments to great films of the silent era.  He has played for and lectured on films by Chaplin, Keaton, Lloyd, Griffith, Murnau and others.

On Saturday March 23, Bruce Vogt’s concert and talk will be illuminating for you the connection between art and biography – with works by Chopin and Brahms.

Tickets are available at North Road Sports and Clothing. 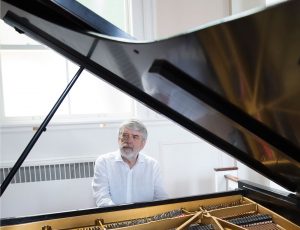