The Winter Of Our Discontent 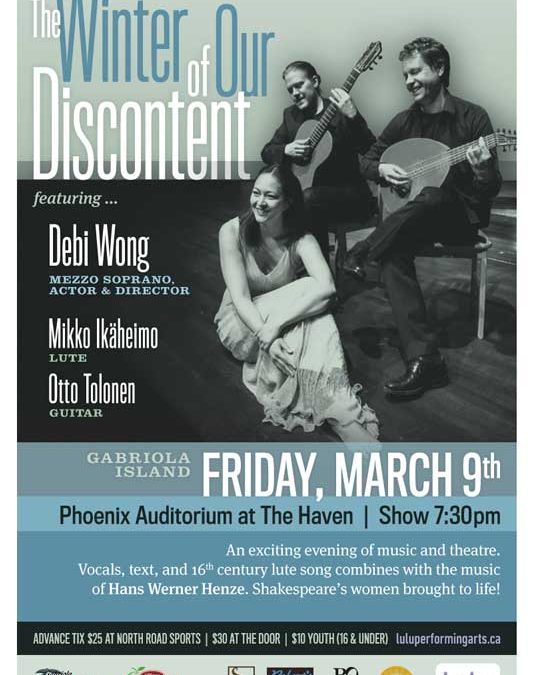 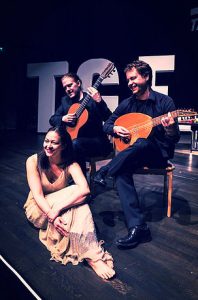 The Winter Of Our Discontent is an unconventional dramatic-recital that combines texts by William Shakespeare with the contemporary music of Hans Werner Henze and the historical music of John Dowland, Thomas Campion and Robert Johnson to conjure the spirits of Shakespeare’s most dramatic characters: Richard III, Juliet and Lady Macbeth.

This staged recital blurs the boundaries between the historical and the contemporary, the musical and the dramatic, the real and the imaginary. 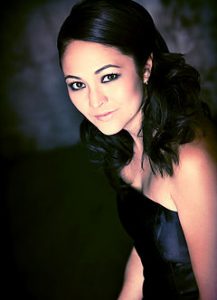 Debi Wong is a Canadian singer, actor and director. As a soloist, Debi has appeared with the Minnesota Orchestra, The Vancouver Symphony Orchestra, The Early Music Guild of Seattle, Early Music Vancouver, The Oregon Bach Festival, The New Haven Symphony, Montreal’s Les Voix Baroques, and Le Festival Lyrique International de Belle Ile En Mer. She also tours regularly with her lute and voice duo, White Sparrow. In its debut season, the duo was awarded ﬁrst place in the Nordic Early Music Federation’s competition. With White Sparrow, Debi has given recitals at the BRQ Vantaa festival and BarokkiKuopio in Finland, The Stockholm Early Music Festival, The Copenhagen Renaissance Festival as well as the Gotham ARTEK concert series in New York City. Debi received her bachelor of music from the University of British Columbia and she hold a master of music from Yale University. She is currently pursuing a doctor of music at the Sibelius Academy in Helsinki.

Guitarist and lutenist Mikko Ikäheimo studied at the Sibelius-Academy in Finland and Basel Musik Akademie in Switzerland. He was a laureate in several competitions and won the Stafford Guitar Competition 2003 in Great Britain. Now based in Helsinki, Ikäheimo works with composers in order to widen the repertoire of his instruments. He performes internationally playing both contemporary music for guitar and early music with period instruments. 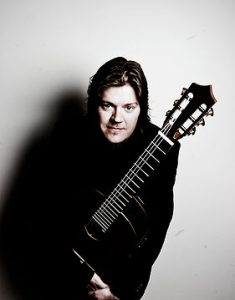 Otto Tolonen, one of Finland’s most successful classical guitarists, has won prizes in almost two-dozen international competitions between 1995-2009. Among these are the ﬁrst prizes of the Andrés Segovia Competition, Herradura, Spain and the Markneukirchen Instrumental Competition, Germany. Mr. Tolonen’s repertoire ranges from Renaissance music to the most recent contemporary works. Lately, his focus has been on works of the 20th and 21st century. His performances of, among others, the guitar works of Henze have won him international acclaim, making Tolonen a highly sought-after interpreter of the composer’s music. Previously, another passion – French music – had kept Tolonen occupied for many years. As a result, his ﬁrst solo CD, tiento français, was published in April 2013 and immediately won him wide critical acclaim. Tolonen has given concerts in Argentina, Brazil, Japan, the United States and all over Europe.