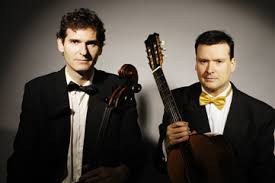 with Michael Jones, cello and Augustin Maruri, guitar. Haled from England and Spain, The Jones Maruri Duo are one of the only established cello / guitar duos in the world, having performed all over the Europe, North and South America, and Asia. (Who’s the connection? Ifan Williams’, former head of the Maritimes Conservatory of Performing Arts in Halifax, daughter Ariana and grandson, Moksha live on Gabriola.)